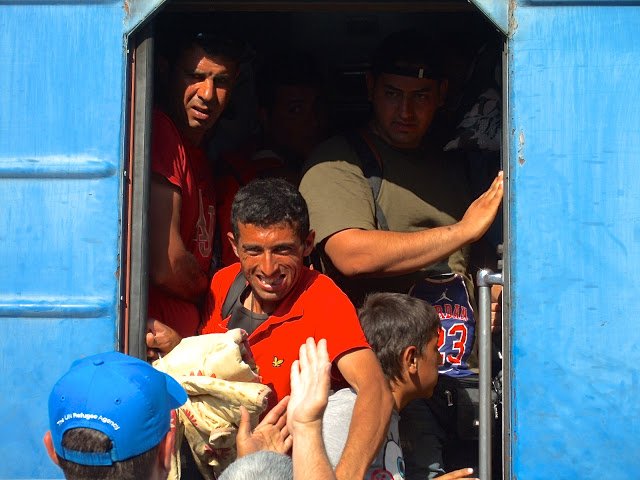 Gevgelija, on the Greek – Macedonian border.

Northern Europeans, heading south for holidays, are fleetingly rubbing shoulders with hundreds of refugees moving in the opposite direction, escaping conflict, persecution and poverty heading towards Western Europe – from Syria, Afghanistan, Pakistan, Eritrea & Somalia. Traffic on the refugee route: via Turkey > Greek Islands > Greece > Macedonia > Serbia > Hungary, has increased significantly during the last three weeks, prompting the UNHCR to declare an unprecedented emergency. The continuous stream of refugees indicates people are ready to make a last-ditch attempt to cross into Western Europe before the new Hungarian Border fence with Serbia is complete. “Everyone is in a rush to get to Hungary,” said one UNHCR official, who confirmed the crossing into Hungary was via unofficial border crossings in Serbia; i.e. fields.

UNHCR officials on the ground tell me that since the construction of the Bulgaria-Turkey fence in 2014 people have, once again, been using sea routes from Turkey to Greek Islands, then via train or bus to the bottle-neck at the Greek-Macedonia border.

Greek and Macedonian police are seemingly turning a blind eye to the influx, and international staff on the ground discretely indicated this to be so, off the record. It appears the unofficial strategy is to let people pass through economically disadvantaged countries, such as Greece and FYR Macedonia, as quickly as possible. Macedonian Police (later) verbally insisted photos of the railway station scenes should not be taken. They were also processing temporary asylum claims very quickly. Macedonian Police Chief Mitko Iliev, has, according to NGO workers on the ground, cleaned up corruption, extortion and criminal acts towards the refugees, while making their asylum claims extra efficient. The asylum claims themselves are merely transient paperwork, allowing a 72-hour passage through to Serbia and beyond, where the whole process begins again.

Refugees appear to be healthy and are receiving medical aid from the red cross, food and water and biscuits from UNHCR, and fruit & vegetables from local NGOs. Kemal Shkrijel of the local NGO ‘NUN’ told me he was significantly happier about the conditions the refugees faced than he was three months ago, and that all the food and water his NGO offered was self-financed.

Many of the Syrians are travelling in family groups. Stories related to me suggest people exiled from Syria in Turkey perceive no future prospects there – hence the big risk to undertake such a journey with their children – and maybe attempting to hook up with Syrian diaspora in Germany.

The route is not an easy one, and those who do not register for asylum invariably undertake the dangerous walk the along the tracks north. In April a group of approximately 50 migrants mainly from Afghanistan and Somalia, exhausted from the long trip, could not manage to avoid the incoming train on the rail track near the city of Veles. The UN Refugee Agency (UNHCR) in Skopje expressed: “Its deepest sorrow and shock,” over the fatal accident that claimed the lives of 14 migrants 22/04/15.

Eyewitnesses claim the scramble for the afternoon train to Belgrade is heated, with threats of violence and refugees making distinctions based on religion, ethnicity or whatever else they can find, in the scramble for the train. I can confirm this to be true, with the potential for conflict and health issues occurring on severely overcrowded trains. I counted around five hundred people pushing for space on 2.5 carriages. “More carriages needed” was the conclusion of one of the workers on the ground.

The train on (20/07/15) was crammed and stunk of urine, despite this many of the refugee children wore broads smiles of excitement at the prospect of moving forward. The same pattern occurs day after day, train after train. Refugees gather quietly, then when the train arrives chaos breaks out. The little police presence is unable to exert much influence, while a larger police presence could inflame tensions even more. Video from (21/07/15) shows the daily cycle: