Three years ago, from a roadside in Kabul, I witnessed one of many refugee camps clinging to the outskirts of the sprawling city. The people inside were the survivors of another freezing winter in which young an old alike had frozen to death due to the hard choices between buying wood, food or clothing. They were the ‘internally displaced’ of southern Afghanistan, fleeing from fighting in Helmand between Taliban, local groups, and troops from my own country. Without means of provision, without employment, without hope and without freedom of movement, they, like the many others, were confined to scratching out a survival as best they could.

Back then people had been smuggling themselves out of the Afghanistan for some time, propelled by enduring conflict and a lack of economic progress, pulled by peace and prosperity elsewhere, escape at all costs was the solution – if you could afford it. During my flight home I was intrigued: how do people with minimum means escape, what is their route; who are the smugglers, how might they reach Europe? Over the next couple of years my migrations would haphazardly follow theirs.

Next stop, Istanbul. In among the cafés and canteens in the immigrant rich part of town people were trapped in similar circumstances to Afghans; but this time they came from a wider world: from Syria, from Palestinian territories, from failed African states. With no access to offical work in Turkey, people faced the similar frustrations of thwarted life opportunities. Those on the move were literally being fenced in – along the Bulgarian and Greek borders wire walls were springing up. People were smuggling themselves through European borders in the engines of trucks and suffocating on exhaust gases or frying in the process.

People filled with the promise of something better, but frustrated in their progress towards it, will always embody a ‘nothing left to loose’ desperation, ripe for exploitation. Incidentally, it should be noted that at this very moment no less than nine ethnic, sectarian or separatist civil wars are spread out in an arch stretching from Pakistan to Nigeria: North West Pakistan, Afghanistan, Syria, Iraq, Yemen, Israel Palestine, Libya, Sudan, Nigeria – not to mention frozen conflicts – so there is seemingly no end to those with nothing left to loose.

Following the smuggling routes my journey continued to Kosovo – another country once ravaged by conflict but in comparison to Afghanistan a paragon of peace and progression, if not prosperity for all. People were confined here too; with a startling 70% unemployment among the young. There were rumors of smuggling routes out, but the dam of frustration was to burst in a much more dramatic way. Stories spread that Germany was allowing people to seek work, and when visa restrictions were dropped to travel to neighboring Serbia, tens of thousands sold up, bought bus tickets, and walked frozen fields on the Hungarian border to the Schengen zone. Many returned empty handed when their asylum claims were refused.

Simultaneously the borderlands of the Balkans were bursting, sending hundreds of thousands of migrants and refugees along railroad tracks and roads to northern Europe. What had started as a slow stream was now a tidal wave. Please excuse if these words are politically incorrect, but it’s next to impossible to find any other metaphor, other than the drama of flood, to describe the scale. and the scenes of chaos. 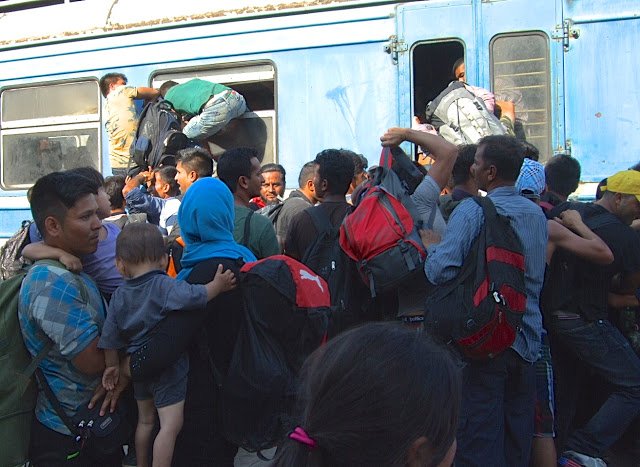 Taking a train to Greece I witnessed thousands of people walking down the tracks – whole families on the move. Wearing my journalist guise I stopped and took interviews and photographs for a humanitarian news service. But the fact that I was working for a humanitarian outlet did not alleviate the sense that simply reporting facts was separating me from meaningful action. Just pointing the camera, or holding a voice recorder removed me from the real story. Relief workers would suddenly give official lines, rather than realities and the refugees seemed more like remote subjects than people. I offered some small money to one of the volunteer relief workers to buy food, but instead of taking it he insisted that I buy some fruit and distribute it.

That was the end of the reporter.

In the simple act of handing out bananas any professional boundary between the refugees and myself dissolved. I refueled and returned to the refugee stations with the intent to help first, soak up stories second. Via a local NGO I was immediately thrown into action: handing out water, food and clothes, walking groups to the border, keeping the camp clean, orientating the disorientated.

This story is told through my eyes, but the last thing it is about is me. There were hundreds of volunteers doing the same and much more, day after day, month after month. Outstripping the big names in the humanitarian relief world they were performing a simple, profound task – meeting immediate human needs. Young men were feeding babies, local people had abandoned their usual lives to feed and clothe others, and random acts of kindness were the norm. More than once I saw a volunteer remove their shoes to give to those who had worn out theirs. It was an outpouring of unconditional and unrelenting solidarity in the face of suffering – the refuges giving more of themselves in gratitude than we could possibly repay. Walking to the border people would tell their stories. Here are a few quotes from my notebook:

Hassan, 19, from Ghazni, Afghanistan was best student in twelfth grade until ‘Taliban’ destroyed his school. He explains his family saved for him to travel but he only has $150 left, having spent $4,200. His heart, he says, is “damaged” and his eyes don’t lie.

Mohammed from Allepo: “I had two cars, big house, now I have nothing.

His companions: “We have big dictator, the village has no food.” “It’s not so much the bombs, it’s the lack of electricity and water.”

Ali, Alawite, abandoned Syrian army for the FSA, “All of the FSA commanders are dead, now the war is only about economics.”

Joseph from Allepo, can hardly speak, he has a learning disability, no money and has soiled his clothing.

In among it all some Americans arrived, they fed the volunteers pizza, and set to work securing supplies…one of them was Elias Matar, a Syrian-American filmmaker. Elias was documenting the stories of the refugees, but first and foremost, he was there to lend a hand. He had reached the same conclusion as me:

“To engage in big issues, we can, if we wish, go beyond the traditional journalistic/documentary approach of reporting and observing by getting practically involved, rolling up our sleeves, and telling the story from the inside.”

The film, “Fight of the Refugees” is the product of Elias’s mission…